First edition of this compendium of Arabic versification. The German classicist and theologian Freytag (1788-1861) studied at Göttingen, but in his final year accepted an appointment as sub-librarian at Königsberg. In 1815 he became a chaplain in the Prussian Army and visited Paris in that capacity. Upon the proclamation of peace Freytag resigned his chaplaincy and returned to his research in Arabic, Persian, and Turkish, studying in Paris under Silvestre de Sacy. In 1819 he was appointed to the professorship of Oriental Languages at the new University of Bonn, and he held this post until his death. His principal work was the "Lexicon Arabico-Latinum" (Halle, 1830-1837), an abridgment of which was published in 1837. 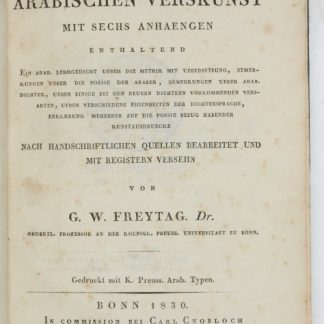