With the full text in Arabic

First edition, with the full text in Arabic: an early effort of the Franco-Irish editor. The pre-Islamic Arab poet Imru al-Qays (497-545) from the Kinda is regarded as the greatest writer in Arabic of his time. His Diwan (complete collection of poems), written in a language of impeccable classicism, was collected from the 8th century; it includes 28 to 68 parts according to recensions.

The Irish scholar William McGuckin de Slane (1801-78), a disciple of Silvestre de Sacy, to whom the present work is dedicated, went on to serve as Principal Interpreter of Arabic of the French Army and Professor of Arabic at the École de langues orientales in Paris. It is remarkable the he chose to present a Latin version of these works: he later became known for his translations into French and English of Arab and Persian historians. 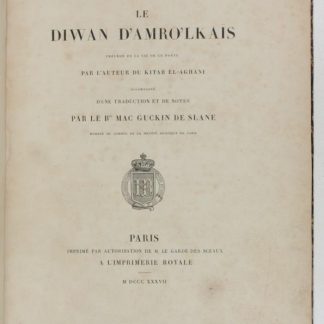