8vo. 148 pp. (collates: [1]2 2-194 = 74 ff.). With western round-head letterpress music notation, a decorated rule on the title-page and each page in a frame of rules. Set in Thai type with incidental roman and the place of publication in a decorative textura. This copy with the letterpress presentation slip on blue paper tipped in (from McFarland and his wife), for people who contributed to the project. Contemporary half tanned sheepskin, sewn on 3 recessed cords, gold dotted fillets on spine, bubble-grain grey-brown cloth sides, probably bound for presentation.

Very rare first edition (first issue) of McFarland's Thai (Siamese) hymnal, one of the first books printed by the mission press at Phetchaburi (Petchabury) in Thailand, with the 86 hymns selected by donors who contributed at least five dollars for the production of the hymnal. Each hymn appears on a single double-page spread (with the music at the head of the left page) except the last, whose text continues on nine additional pages. The texts of the hymns themselves appear only in Thai, but the title, introductory note and hymn titles also appear in English and each hymn gives the name of the person or organisation that selected it in English only. Some of the donors who selected the hymns lived in Thailand (both Europeans and natives) but most lived in the United States. Each hymn also indicates the metre, either with abbreviations for the common, long, short, hallelujah or particular metre, or with an indication of the number of syllables per line. The music was apparently set and electrotyped by J.M. Armstrong in Philadelphia and the electrotype blocks shipped to Phetchaburi for printing, for the Newberry Library copy of the second issue has a manuscript note "Music typography by J.M. Armstrong, Philadelphia, Pa." (Armstrong advertised his services for music typesetting and electrotyping at the 1876 Centennial Exhibition).

The first European book printed in Thai type is said to be Jean Baptiste Pallegoix's 1854 Thai dictionary (with Latin, French and English translations) by the Imprimerie Impériale in Paris, but missionaries printed Thai books in Asia decades earlier. The Missionary George H. Hough set up a printing office in Yangon (Rangoon), Burma, where he had Thai type made and used it in 1819. His materials were taken to the mission press in Calcutta soon after. Claudius Henry Thomsen of the London Missionary Society brought a printing press to Singapore in 1822 and operated it with another missionary, Samuel Milton, who brought a fount of Thai type from the Calcutta mission, along with a set of matrices to cast more. Thomsen sold the press and materials to the American Board of Commissioners for Foreign Missions (ABCFM) in 1834 and John Taylor Jones printed Thai for them there in 1835. The ABCFM missionary Dan Bradley took one press and the Thai type to Bankok in July 1835 and produced Thailand's first printing with Thai type in 1836, and Jones moved there to take charge of the press. The Thai King Mongkut (Rama IV)'s interest in printing features in the musical "The King and I", based on Anna Leonowens's 1870 memoires. In 1861 Samuel McFarland, Daniel McGilvary and their wives set up the first Thai mission outside Bankok at Phetchaburi, where McFarland printed the present hymnal in 1876 (he is said to have printed a dictionary in 1866). A second edition appeared in 1885 and the fifth and last in 1920.

We have located five other copies of the 1876 edition. The four recorded in WorldCat have 181 pages, but the Pittsburg Theological Seminary has a second copy that has 148 pages, like the present copy. The preliminary note explicitly says the hymnal includes 86 hymns and they are all present, and there is no evidence that any leaves ever followed page 148, so the additional leaves sometimes included were probably added after copies had been distributed to donors. They probably add further hymns or possibly some other supplementary text. The presentation slip for the donors notes that the hymnal is already being used by the missionaries' congregations, so the present copy probably shows the book as the Thai people first saw it. 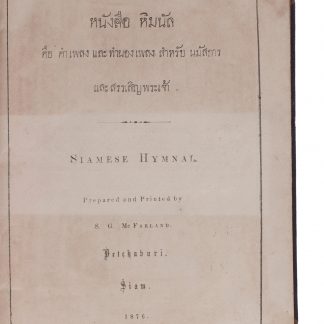