[Slave Trade]. Slave Trade. No. 8 (1874). Correspondence with British representatives and agents, and reports from Naval Officers, relative to the East African Slave Trade. From January 1 to December 31, 1873. Presented to both Houses of Parliament by command of Her Majesty. 1874. [C.-1064].

Rare British parliamentary papers and correspondence with local agents and officers on the slave trade, including the text of the treaty closed between the UK and Barghash bin Said, the Sultan of Zanzibar, for the suppresion of the slave trade. The Arabic dynasty of the Al-Saids ruled Zanzibar until the revolution of 1964. Barghash (1837-88), second Sultan of Zanzibar, was the son of Said ibn Sultan (1791?-1856), the last of the dynasty whose empire included not only Muscat and Oman, but also Zanzibar, where he had established his capital in 1840. Upon Said's death in 1856, quarrels ensued among his heirs, and his realm was divided: his third son, Thuwaini, succeeded him as Sultan of Muscat and Oman; and his sixth son, Majid, became Sultan of the wealthier Zanzibar, after whose death Barghash became Sultan.

Also includes an account of the murder of a British officer by natives; of a slave dhow run ashore at Ras Madraka on the coast of Oman; etc. Comprises: "Zanzibar" (pp. 1-108); "Reports from Naval Officers. 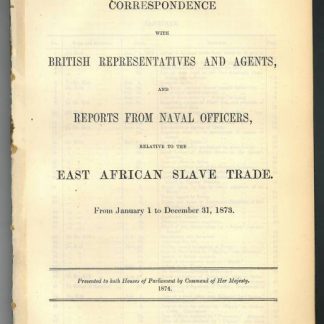