A densely-used two-sided autograph sketchleaf containing music to opus 117, "König Stephan" or "Ungarns erster Wohltäter" ("Hungary's first Benefactor"), the front showing, among other motifs, the opening cello/bassoon line for the beginning of the first movement chorus, "Ruhend von seinen Thaten" (Andante maestoso e con moto, C major), and the verso with material from the end of the movement, all over with various freely written passages in ink and pencil, mostly on single staves, some with text underneath, containing many holograph corrections and instances where ink is written over pencil.

The present sketchleaf, apparently hitherto unknown to scholarship, belongs to a book of sketches that Beethoven used while writing his stage music "König Stephan" in 1811. Beethoven created his own book from various paper on hand and used it while at the spa in Teplitz from late 1810 into mid 1811. He finished "König Stephan" between 20 August and mid-September 1811. The sketches are of the first chorus (after the overture). The musical play was commissioned for the opening of the new theatre in Pest along with "The Ruins of Athens". First performed on 9 February 1812, it was published as op. 117. King Stephen I founded Hungary in 1000. Emperor Francis I of Austria commissioned the new theatre, and Beethoven was chosen as the composer to honour the occasion of the opening. The Austrian Emperor was honouring Hungary's loyalty, thus the subject matter on a text by August von Kotzebue.

The Beethoven-Haus in Bonn holds four other sketches from this sketchbook (viewable in their digital online archive, as entries HCB Bsk 2/50, 3/51, 4/52, and Mh 81), all of which share the same three holes punched on the left-side margin of the present sketch. We would like to thank Dr. Carmelo Comberiati, professor of Music History at Manhattanville College, for his assistance in cataloguing this lot.

Provenance: Friedrich Wilhelm Künzel, Leipzig, before 1886; Collection of Fred M. Steele, Chicago, purchased from the above, 1886. Offered in the "Collection of Important Autographs in the estate of Mrs. Ella P. Steele, widow of Mr. Fred M. Steele" (Philadelphia, 1918). Acquired from the purchaser's descendants, last located in Greenwich, CT.

For an in-depth discussion of the pages to which this sketch belongs, cf. Douglas Johnson, Alan Tyson and Robert Winter, "The Beethoven Sketchbooks", p. 201-206. 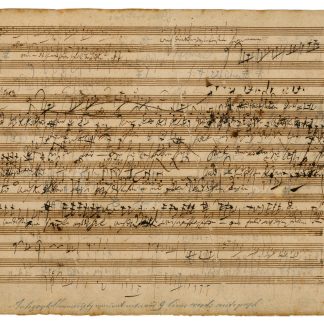