A total of 36 vols.: 26 text vols. (4to) and 10 atlas vols. (elephant folio). With coloured frontispiece and 899 engraved plates and maps, many double-page-sized and folded. Slightly later English half calf, professionally repaired in places.

Second edition of this monumental work (the first was published from 1809 onwards), the first comprehensive description of ancient and modern Egypt. Commissioned by Napoleon during his Egyptian campaign between 1798 and 1801, this encompassing historical, archaeological, art-historical, and natural-historical account of the country was realised through the efforts of the Institut d'Egypte in Cairo. Its influence was enormous, establishing Egyptology as an intellectual discipline and nurturing a passion for Egyptian art throughout the Western world. Edited by some of the leading intellectual figures in France, the Description also includes contributions from celebrated artists such as Jacques Barraband, Pierre-Joseph Redouté, Geoffrey Saint-Hilaire, Jules-César Savigny and others. More than 150 scholars and scientists and some 2000 artists, designers and engravers were involved in its preparation. The success of the publication was such that work on the second edition (known as the "Pancoucke edition") began before the first was completed. The text was expanded into a greater number of volumes, now printed in a smaller format; new pulls were taken from the plates, and these were bound with many of the large-format plates folded into the new, reduced dimensions.

A splendid, clean copy, complete with all the plates. An incomplete copy of the second edition of the Description de l'Egypte sold at Sotheby's for £68,750 in 2016. 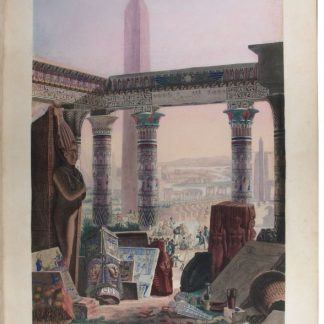