First Amsterdam reprint: Taviernier's description of the Ottoman Imperial Seraglio - his first published work, which had appeared separately as early as 1675 - here forms the final part of his "Recueil de plusieurs relations et traitez singuliers & curieux", an independent publication which was, from 1679 onwards, appended to the author's "Six voyages en Turquie, en Perse, et aux Indes" (thus ultimately forming that collection's third and final volume). It was this volume, containing Tavernier's studies in commercial politics, that made the author's travels widely known. The fine maps show Japan and Tonquin, the plates depict costumes, a theatre performance, temples, and various processions. A woodcut in the Seraglio section gives the Islamic profession of faith, the Shahada, in Arabic script. "Tavernier spent eleven months in Constantinople before setting out on his first journey. He joined a caravan for Persia in 1638 and, between 1643 and 1668, made six voyages to Persia, India, the East Indies and Japan. During his travels he amassed a large collection of diamonds and jewels. His successful commercial enterprise was recognised by Louis XIV and he was granted a patent of nobility for his contribution to the establishment of French trade in Asia. It was Tavernier who indicated the trade routes to the East and made it possible for others to follow him. According to Brunet, the 'Recueil' appears with all editions of the 'Six Voyages' printed after 1679" (Atabey). "It appears that much of his information on the Seraglio was obtained from two former employees of the Sultan, one a Frenchman, the other an Italian" (Blackmer).

Binding rubbed but tight; a tear to one map repaired. Slight browning throughout due to paper. A good copy. 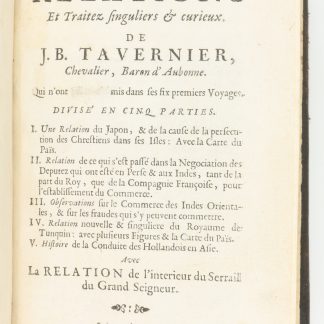