A description of Beijing, with six accurate plans

First edition of a description of Beijing, illustrated with six accurate plans. The French cartographer and astronomer Joseph-Nicolas de L'isle (1688-1768) had been corresponding about Chinese astronomy and geography with Jesuit missionaries for more than 30 years, collecting a vast amount of valuable information. The Jesuit father Patouillet asked him to compose a map of Beijing, based on these memoirs, to illustrate a description of the city he was preparing. Unfortunately, Patouillet was unable to complete his description, and De L'isle, assisted by the French astronomer and geographer Alexandre Guy Pingré (1711-96), continued and finished it. Astronomical observations helped them to determine the position of Beijing. The work starts with a description of the foundation of the city, the palace, other buildings and the suburbs, followed by some observations on the Li, also called the Chinese mile: the traditional Chinese unit of distance.

Some leaves slightly browned, some spots throughout and one plate with a small tear in the margin just touching the image. Binding slightly rubbed along the corners. A good copy, only slightly trimmed. 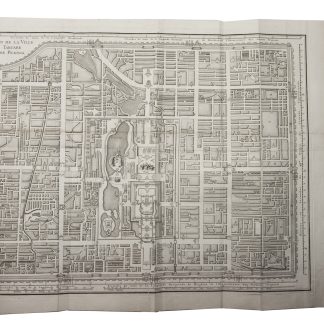