4to. 4 parts in 1 volume. (8), 47, (1) pp. (38) pp. 63, (1) pp. 18 pp. With 2 title pages, the first and dedication on its verso printed in red and black, 1 botanical woodcut in text, woodcut headpiece, tailpiece and decorated initials, woodcut Chinese characters, decorations built up from cast fleurons. With diamond-head music notes, long passages in Syriac and Arabic type.

A series of works apparently printed and published together (even though the second title-page gives a different publisher and date) on various aspects of China and its culture, by the gifted orientalist Andreas Müller (1630-94). The title-page of part 1 lists seven numbered subjects for its brief observations: history, missionaries in China from the time of the Old Testament to the time of publication, Chinese emperors and other rulers, ginseng and its medicinal uses, astronomy and the calendar, geography and the relation between the names of the planets and the days of the week. Part 2 is devoted primarily to the transliteration in italic type of an extensive Chinese inscription, using special diacritical marks to indicate the tones and representing them also with Western musical notation above the text. It was a 781 "Nestorian" (East Christian) inscription that had been discovered in the 1620s and first published by Athanasius Kircher in 1667. Müller took issue with Kircher's publications on the inscription. It is followed by several shorter texts, including two pages with parallel columns giving an Aramaic text (the language of the Nestorians) in Syriac script with a Latin translation, and a phonetic rendering of the Chinese Lord's Prayer. Parts 3 and 4 contain additional commentaries on the same Nestorian inscription.

Although the title-page to part 2 is dated "1672" and names the "officina Rungiana" as publisher, all four parts appear to be printed on the same paper stock and they share at least some typographic materials. At least the supplements (which have no date or imprint) seem likely to have been printed by Schultz with part 1, and part 2 may have been as well.

The extensive use of Syriac and Arabic type gives the publication special typographic interest, and it also provides a fine example of Reinier Voskens's two largest italic types (the largest in the 6-page dedication), only about a decade after he cut them. Copies with all four parts complete are extremely rare, VD17 recording at most one.

Somewhat browned, but otherwise in good condition, with only some tiny marginal worm holes (affecting 1 letter in the imprint of the second title-page). Parts 2 and 4 each lacks a final blank leaf. A remarkable example of early oriental studies. 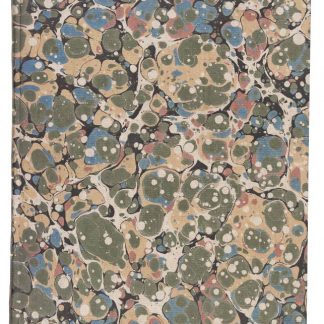