In French. Turgenev had read the first part of Tolstoy's new novel 1805 ['War and Peace'], which appeared in instalments between 1863 and 1869. He found it boring and cold, and complains of the lack of historical sense and of its lack of poetry: "Que c'est ennuyeux et froid, quelle recherche de la petite bete, quel manque absolu de sens historique, d'imagination et meme de poesie (chose etrange chez lui). C'est un peintre de miniatures qui a voulu faire un grand tableau d'histoire - et il s'est casse le nez […]". He adds that Merimee views Tolstoy's 'The Cossacks' in a similar light; Turgenev himself considered The Cossacks to be the best story written in the Russian language. He describes life in Baden and the musical matinees given each Sunday by the Viardots. He has purchased land in Baden and will build a house there (near his beloved Pauline Garcia Viardot).

This important letter is apparently unpublished. In spite of his criticism of Tolstoy in this letter, Turgenev altered his opinion of 'War and Peace' after he read the work in its final revised version in 1866, and he later promoted it extensively in France and Germany. 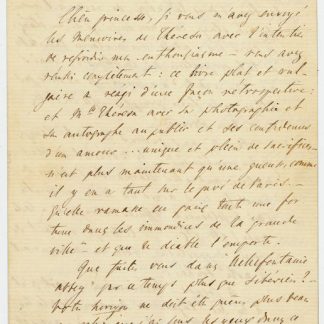