Einstein, Albert, German-born physicist and Nobel laureate (1879-1955). A large archive of material featuring a typed and signed letter to Wsevolode Grünberg and a short autograph note by Einstein, an ALS by Elsa Einstein and 2 TLS by Helene Dukas. Accompanied by a large archive of Grünberg's papers, consisting of well over 1,000 pages of material including some of his original drawings for his hydrofoil improvements, copies of his patents, etc.

Grünberg, who later in life changed his name to Waldemar A. Craig, was a hydrodynamic engineer who developed an important design for the hydrofoil. The letters accompany a large archive of Grünberg's papers, consisting of well over 1,000 pages of material including some of his original drawings for his hydrofoil improvements, copies of his patents, (including a large dossier of declassified tests performed in the years immediately following WWI), photographs, correspondence, and other related documents and ephemera.

Wsevolode Grünberg was the nephew of the Russian orthodontist and collector Josef Grünberg, one of the few close friends of Albert Einstein, who gave him the nickname "Bolshie". It appears that Einstein and his second wife Elsa had become acquainted with Wsevolode Grünberg shortly before their friend's death in 1932, if not personally, then by correspondence. In an undated letter from Berlin, written sometime before 1932, Elsa Einstein commented to Wsevolode Grünberg: "I am assuming you are just as kind and clever as your uncle, our dear friend. My husband and I were so glad having been able doing this small favor for you. Mr. Dunne wrote a most gracious note to us from Florida. In particular I want to thank you for the delicious grapefruits [...]", adding, "Feel free to call on me anytime if you think I could be of help. Please be sure and do so".

Apparently Grünberg acted on her advice, and travelling to the United States in 1939 approached Einstein for an introduction to fellow engineers in the U.S. in order to demonstrate his hydrofoil designs. The two met in June 1939 at the home of Irving Lehman in Port Chester, New York. Einstein assisted Grünberg with the inheritance issue, acting as a go-between for Grünberg in the U.S. and Plesch in England.

Despite some annoyance, Einstein did what he could for Grünberg both regarding his inheritance and his scientific pursuits. Grünberg's personal papers concern his research on his hydrofoil designs which he first developed in France. The archive includes some of Grünberg's original drawings demonstrating applications for his design as well as some manuscript calculations in his hand, some original U.S. patent certificates for several inventions, one German patent awarded to him in 1930, original photographs, likely from the early 1930s, and several magazines including Popular Science and others discussing Grünberg's work and designs. 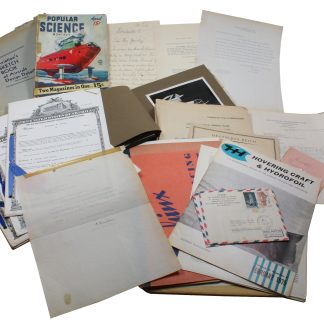