1472 incunabular encyclopedia of the world, containing references to Arabia, Syria, Palestine, and the Saracens

Folio (310 x 220 mm). (46) ff., one final blank. Rubricated in red throughout and about half of the spaces left for initials filled in red by hand. 19th century red sheepskin, marbled sides.

First edition of the popular "Imago mundi" of Honorius Augustodunensis (1080-1154), an incunabular encyclopaedia of popular cosmology and geography combined with a chronicle of world history, containing references to Arabia, Syria, Palestine, and the Saracens and thus providing one of the earliest mentions of Arabia ever printed. The monk Honorius takes the river Nile as the boundary between Africa and Asia (naming the latter continent in its entirety "India"). Arabia is described in the subsection on Mesopotamia. The description of this country, found along the Tigris and the Euphrates, also includes an account of the Kingdom of Sheba, home of the Queen of Sheba, and is said to be inhabited by the Moabites, Syrians, Saracens and others. After Mesopotamia we find Syria, including Phoenicia, which is followed by sections on Palestine and Egypt.

The "Imago mundi", which by scholarly consent was not published after 5 February 1473, exemplified the picture of Africa and the Orient prevalent in the West ca. 1100, which were perceived as lands full of marvels. It is one of the five earliest books printed by the great and prolific Nuremberg printer Anton Koberger.

Binding slightly rubbed; a few early manuscript annotations by a near-contemporary humanist in the margins. From the library of the Frankfurt physician Georg Franz Burkhard Kloß (1787-1854), also a noted historian of freemasonry, with his bookplate on pastedown; additional bookplate of Jean R. Perrette. Lacking the second of the two last blank leaves. A few wormholes, a couple of leaves attached to stubs, but otherwise in very good condition. 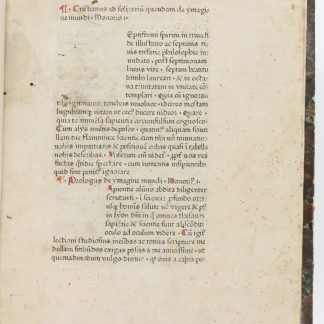