Woodcut ovoid roundel (60 x 75 mm), contemporarily trimmed to just outside neatline and contemporarily mounted to a larger sheet of paper (in excellent condition).

One of the earliest printed views of what is today Beijing: an unrecorded bird's eye prospect over 'Cambalu', or Khanbaliq (on the site of modern Beijing), the capital of China during the Yuan Dynasty (1271-1368). The Yuan Dynasty was founded by the legendary Mongol warrior Kublai Khan, who after conquering China proclaimed his new capital at Khanbaliq, although the city would not be completed until 1293. During the succeeding Ming Dynasty (1368-1644), Khanbaliq was transformed into what is known as Beijing. Interestingly, as seen in the view, the walled rectangular form of the old city of Beijing is already evident in the design of Khanbaliq. Marco Polo visited Khanbaliq, but his description of its location was vague. For over two centuries thereafter Europeans were confused as to not only the location of "Cambaluc", but they even sometimes confused its identify with "Cathay" (China), thinking that it was the name for the entire country. This confusion was cleared up by the Jesuit Matteo Ricci during his first visit to Beijing in 1598, when he definitively identified Khanbaliq as the precursor to the modern Chinese capital. The present work is one of a series of 26 woodcut roundels of views and maps that were found together as collection. Charming, mysterious and apparently unique, in the absence of any accompanying documentation we are left to make educated guesses about their genesis. By all appearances they seem to be late 16th or early 17th century Flemish or Dutch woodcuts, probably proofs for vignettes to adorn the sides of an unrealized copper-engraved wall map (or maps). Indeed, this period saw the beginnings of the "carte à figures" wall maps that became all the rage during the 17th century, and which occupied an iconic place in the art world of the Low Countries. In the fluid and fast-paced environment of the large European print shops, it was common for artists to experiment with designs for copperplate maps by making woodcut proofs, as carving into wood was much quicker and cheaper. Only if the design was accepted for publication was it engraved into copper (an expensive and demanding process). The views within the roundels were generally predicated on the most authoritative recent sources. Many of the views are based on those published within the first four volumes of Braun & Hogenberg's "Civitates Orbis Terrarum" (6 vols., 1572-1618), the first great "town book", featuring bird's eye views of cities in Europe, Asia, Africa and America. Inspired by Ortelius's ground-breaking world atlas "Theatrum Orbis Terraum" (1570), which featured all of the world's known regions in detail, this monumental endeavour featured 546 views and maps of cities. The views from the "Civitates" are imbued with profound historical importance as, in many cases, they are the first accurate and detailed views of many great cities and towns, and were the most popular and influential images of these urban centres available to Europeans during the late 16th and much of the 17th centuries. Other fantastic sources include Jan van Linschoten's "Itinerario" (Amsterdam, 1596), one of the most consequential books ever written, responsible for breaking the Portuguese monopoly on European trade in South and East Asia. Likewise, other views were borrowed from important and pioneering 16th century prints and manuscripts. The unknown maker of the set of roundels to which the present view belongs likely intended for them to serve as proofs for the vignettes adorning the sides of an intended "carte à figures" wall map (or more likely maps). The creation of such woodcut proofs was commonplace, although very few examples survive to this day, as most were destroyed once their incidental use had transpired. In any event, these woodcut roundels are a fascinating insight into the operations of a large cartographic workshop in the late 16th century. 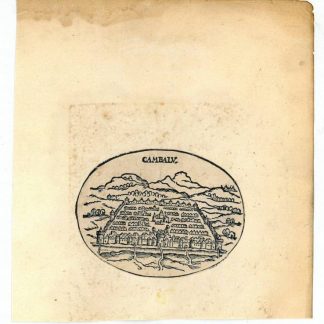