To Peter Cornelius ("Liebster Cornelius"), in German, telling him that he has just been informed that the full score of his opera, "Der Barbier von Bagdad", was not in the local theatre library as Cornelius had kept it, and asking that the score be sent to him by return, the trio being an essential part of the programme entitled "Performance of Manuscript Works of the Present Time".

Franz Liszt, Peter Cornelius's mentor and friend, was due to conduct a piece from Cornelius's controversial comic opera "Der Barbier von Bagdad" at the third concert of the Artists' Congress in Weimar on 7th August 1861. The opera was first performed at the Hoftheater in Weimar on 15th December 1858, amidst a hostile demonstration organised by the theatre director, Franz Dingelstedt, who was in conflict with Liszt and the so-called neo-German school of composition. Liszt resigned his post after the fracas and both he and Cornelius left Weimar as a result. The opera was not played again in its entirety in the composer's lifetime but, as is clear from this letter, Liszt remained loyal to his friend and secretary, and continued to champion his work. According to Grove, Cornelius was a "gifted independent composer" who "may have been the composer from the Liszt circle who, after Liszt and Wagner themselves, most successfully realised the musical ideals of the New German school, albeit in a highly personal idiom" (New Grove Dictionary of Music and Musicians VI, 477). 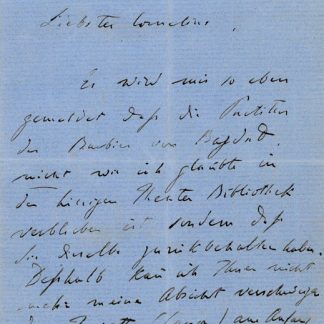