5 glass positive lantern slides (85 × 100 mm), each with a black paper mask, paper tape around the edges, a letterpress slip at the foot giving the publisher's name and city, and a slip at the head with the manuscript title. Stored in a contemporary purpose-made wooden box with brass fittings, with the word "Mekka" on the top of the hinged lid.

Five of the earliest and best photographs of Mecca and Medina, beautifully preserved as silver gelatin glass plates, including the first photograph of the Ka'ba in Mecca's Masjid al-Haram (Great Mosque). Two of the photographs were taken by the first person to photograph Mecca and Medina, the Egyptian Colonel Muhammad Sadiq Bey (1832-1902), who made them in 1880 for the Ottoman Sultan Abdülhamid II. The others were taken by the first European to photograph Mecca, Christiaan Snouck Hurgronje, and Al-Sayyid 'Abd al-Ghaffâr, who worked closely with him. Snouck Hurgronje (1857-1936), one of the greatest pioneering Dutch Arabists, converted to Islam and lived in Mecca from January to about July 1885. The photographs by these three men are best known and most frequently reproduced from the published collotype facsimiles, while the rare surviving early albumen prints are usually faded or otherwise in bad condition. The present five plates, sold as lantern slides for magic lantern presentations, are therefore of the greatest importance as well-preserved high quality specimens of these famous photographs, providing the best early images of the mosques of Mecca and Medina.

All five slides are in very good condition, with only a bit of dust and the occasional smudge on the glass. They show: 1) The Masjid al-Haram in Mecca (the Great Mosque); 2) a closer view of the Ka'ba in Mecca; 3) the portrait of an unidentified Mu'ezzin in Mecca; 4) a portrait of an unidentified East Indian pilgrim; 5) the al-Masjid an-Nabawi in Medina (the Prophet's Mosque). 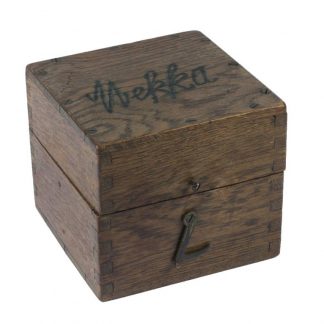