Portugal's political and economic decline, with extensive chapters on France and the Umayyad Caliphate

4to. 2 volumes bound as 1. With lithographed frontispiece and with a small woodcut Portuguese royal coat of arms on title-page of both parts. Contemporary half sheepskin, gold-tooled spine.

Rare first and only edition of a monograph on Portugal's political and economical decline, consisting of the two parts, by Antonio Maximino Dulac (1768-1850). The author examines the historical, political, agricultural and economic background of Portugal, comparing it to other European countries and trying to find "remedies" to "cure" the Portuguese state. In the first part Dulac deals at great length with France, whereas the second part deals, among other aspects, with ancient Egypt and the Arabs in the Iberian Peninsula. He examines the Umayyad dynasty, especially the reign of Abdullah (855-912) and Abd-ar-Rahman III (889-961).

Some marginal (water)stains and some pages somewhat thumbed. Binding worn along the extremities, especially at the bottom of the spine. Overall in good condition. 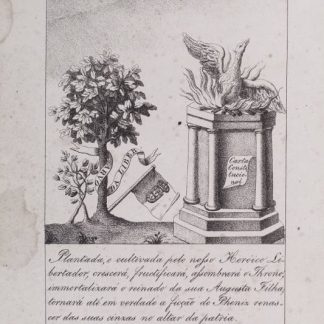