Extremely rare first edition of this valuable Persian grammar printed in Rome on the presses of the "Propaganda Fide". The third work of this kind, preceded only by those of Louis de Dieu (Leiden 1639) and of Greaves (London 1649). Willems notes that G. B. Raimondi, as early as 1614, produced a grammar in Rome for the use of missionaries which remained virtually unknown in the west, but this existed only in manuscript. The grammars of Greaves and of the present author were both "largely based on De Dieu" (Smitskamp).

Ignazio di Gesù (Carlo Leonelli) was a 17th century Italian missionary. He "belonged to the Order of Discalced Carmelites, and preached the Gospel in Turkey, Asia Minor, Armenia, and Persia, where he stayed over a long period. He especially tried to convert to the Catholic faith the so-called sectarians of Saint John (in eastern Mendaï). He returned to Rome in 1650" (cf. Hoefer). An account of his travels was included in the collection of Thevenot. His present small work, though not the work of an orientalist nor indeed a scholar, is still a true grammar based on elements collected during the author's journeys.

Some browning as common, otherwise a very good, untrimmed, wide-margined copy as issued. 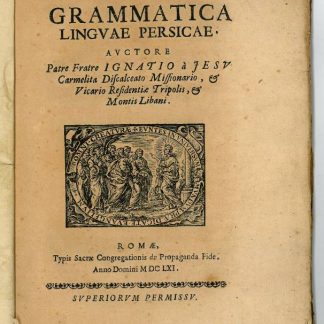