Persian translation of this Sufi guide to the devout life, also known as "The High Road of Worshippers" or "The Path of the Worshipful Servants". The 11-century Persian theologian, jurist, philosopher, and mystic Al-Ghazali has been called the single most influential Muslim after the prophet Muhammad, and a "Mujaddid", or Renewer of the Faith. His works were so highly acclaimed by his contemporaries that al-Ghazali was awarded the honorific title "Proof of Islam" ("Hujjat al-Islam").

Numerous marginal annotations throughout. Binding rubbed and bumped at extremeties; upper hinges starting. Some waterstaining to margins; occasional paper flaws and traces of worming repaired; a few edges folded in to preserve marginalia from further trimming. Later inscription in Arabic on final page, and inscribed in English "to Prince Jehandoor" (27 Nov. 1836) under the colophon. 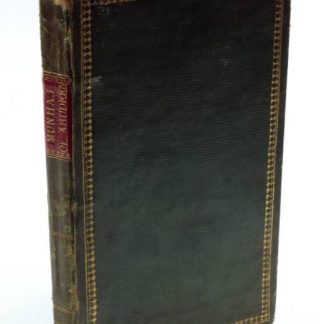