Laying the foundations for Marxism as a doctrine

Extremely rare first separate printings of Engels's "Anti-Dühring" (properly, "Mr Eugen Dühring's Revolution in Science"), previously published only in serialized form in the "Vorwärts" between January 1877 and July 1878 and today considered one of the most influential Marxist texts. At the suggestion of Liebknecht, who had his eye on the generally poor socialist readers unwilling to spend the cost of an entire book at one go, the work was then separately released in two fascicules: the first appeared in mid-September 1877, while the second came out together with the book edition in July 1878. The present volume unites these two separate instalments, using the title page of the second and including the preface - issued with the second part - before the first, so as to approximate the appearance of the complete book edition.

Prompted by a need to counter the growing influence of Dühring's anti-Marxist brand of socialism on German social democracy, the polemic was - as Engels wrote to Marx - an attempt "to produce an encyclopedic survey of our conception of the philosophical, natural-science and historical problems". While the term "scientific socialism" was not in fact coined by Engels, it was in this work that he invested it with the meaning as it is generally understood today: by praising it as the most epoch-making achievement of Marx's work and the theoretical expression of the proletarian movement (pp. 175, 236), Engels here prepared the ground for Marxism as a doctrine.

The preface (usually bound between pp. 120 and 121) is dated "June 1878". As nearly always only one of the two possible title pages is included, namely in this case that of the second instalment, with the heading of part one, "I. Philosophie", supplied in ink by a contemporary owner above the printed caption "II. Politische Oekonomie. Sozialismus" (the book edition was given a new title reading "Philosophie. Politische Oekonomie. Sozialismus").

The typographical errors have been corrected in the text by a contemporary hand in pencil. Some browning as common due to paper. Very minor rubbing to extremeties; a very good copy. 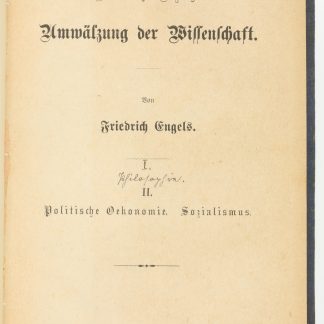