"The book of the noble science": an illustrated 16th century manuscript manual on astronomy

An intriguing, elegantly written and well illustrated handwritten manual about the "noble science of the movements of the planets", forming a detailed display of 16th century astronomical knowledge and all related information available, compiled by an otherwise unrecorded author. Joannes Bonsignorius, likely a member of the Sienese noble Bonsignori family noted for their important role in the history of banking, brings together all the information which a contemporary might need to read the planets and the stars. He begins with explanations of the Metonic cycle, leap years, and ascendants, proceeds to the calculation of new moons and moveable feasts, then expands on the qualities and characteristics of the signs of the zodiac, the influence of the ascendants on each, planetary aspects and their influence on 'air' and climate, lunar and solar eclipses, the planetary houses, triplicity rulers, friend and enemy planets, elaborates on the effects of the planets on the human body (perceived as pain in various body parts) and on the movement of the ascending lunar mode before finally enumerating which countries and cities of the world are ruled by which zodiacal sign (while England, for example, comes under the influence of Aries, Damascus is listed under Leo; Egypt, Babylon and Constantinople are under the sign of Cancer, and Alexandria is said to be ruled by Gemini).

Condition: written on paper assembled from various stocks, showing five different watermarks. While none of them can be positively identified with the specimens illustrated by Briquet, it is interesting to note that they all largely conform to types common among Swiss and Southern German papermills: three show the "Crosse de Bâle" (types: Briquet I, 1313, 1339 & 1357), one shows the griffin-head of Freiburg im Breisgau (type: Briquet I, 2216), and another shows an eagle with an F (type: Briquet I, 154), originating in Frankfurt am Main but used throughout the Rhine Valley and even in the Habsburg provinces. One leaf stained at foot; some light browning; the final leaves of index a bit brown-stained in the outer margins; overall in excellent condition, and in its original first binding.

Provenance: as stated on the first page in the author's own hand, the present manuscript was written in 1579 and dedicated by Bonsignorius to a member of his family named Nicolo. Later in an unidentified European collection (shelfmark "XXII" on front pastedown). Recently acquired from a U.S. private collection. 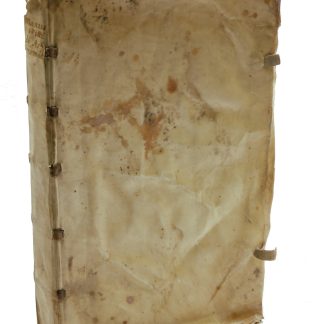