First edition of Marx's longest polemical work, which he took the best part of a year away from the writing of "Das Kapital" to complete, this copy containing the author's autograph corrections. Levelled at the polical writer and democrat of 1848, Karl Vogt (1817-95), the book is an answer to the slanders against himself, Engels and their supporters which had appeared in Vogt's 1859 pamphlet, "Mein Prozess gegen die Allgemeine Zeitung". A former member of the German pre-parliament, Vogt had become professor of geology in Geneva in 1852. When in June 1859 the "Augsburger Allgemeine Zeitung" circulated the rumour that he was a paid agent of Napoleon III, Vogt suspected, not without justification, that Marx's circle was behind the report. In fact, only in May had the Baden revolutionary and refugee Karl Blind privately revealed to Marx his knowledge of Vogt's entanglements (as here recounted on p. 58), and since Marx took no pains to be discreet about the matter, the story had quickly found its way into print; the feature in the Allgemeine Zeitung to which Vogt objected had merely reprinted an anonymous leaflet authored by Blind himself. Vogt sued the paper for libel, and the suit was tried at the Augsburg district court on 24 October 1859. No proof of the accusation was produced (against Marx's hopes, Blind - who had been called as a witness - denied all knowledge of the matter), and the charge was ultimately dismissed on technical grounds. Vogt exploited his moral victory by publishing the shorthand report of the court proceedings, bolstered with copious documents, so as to expose the communists as traitors and conspirators. Although Marx was already weary of the affair, he picked up the gauntlet: in this rebuttal of nearly two hundred pages, he answered "Vogt line for line and charge for charge [...] Marx spares neither wit nor invective in demolishing his opponent" (R. A. Archer, in the preface to his 1982 English translation). A fine example of Marx's talent for merciless satire as well as of his often prolix attention to detail, the book had little or no public effect: even when in 1871 the Paris Commune raided the government archives and produced proof that Vogt indeed had been in the pay of the Bonapartists, Marx's vindication escaped general notice. "An important historical document, and a classic example of irreconcilable political controversy" (cf. Sauer & Auvermann V, 2340).

In the present copy, Marx has made reading marks to pages 59 and 60, highlighting the name of Andreas Scherzer, an exiled radical journalist and protagonist of the London-based "German Workers' Educational Association". He further makes two corrections to the date events took place, one on page 155 (correcting "März" to "September"), the other on page 160 (changing "24" to "20"), and further corrects two errors on page 188 ("en exchange" to "en echange" and "du vieux hermite" to "le vieux hermite"). Bound with this famously overlong polemic, clearly once in the personal possession of Marx, are 15 additional brochures and pamphlets. They would appear to have been assembled by a German radical democrat in English exile; indeed, several of them were written by Karl Blind or reflect his known interests and associations, making it plausible that the present volume was made up for him. 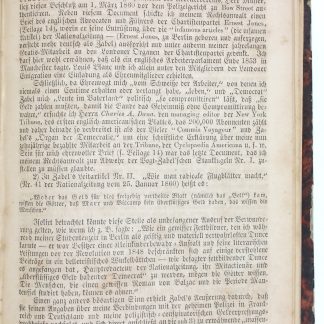