Wall paintings for the Met, tapestries for the Knesset

To Haim Gamzou (1910-1982), director of the Art Museum in Tel Aviv, concerning his works for the state hall of the Knesset building and for the Metropolitan Opera in New York. Chagall expresses his sorrow about not being able to attend the opening of the Knesset, because he was tied up with finishing three tapestries ("Gobelins") that he wants to donate to the Knesset. Meanwhile he had been to America where he surveyed the installation of his tapestries at the New Metropolitan Opera. Unfortunately Chagall has to visit America a second time in January to work on Mozart's Magic Flute.

Chagall created two big wall paintings, located in the entrance hall, for the opening of a new building of the "Met" on 16. IX. 1966. For the Knesset Chagall designed, next to floor mosaics, as well three large tapestries that were unveiled on 18. VI. 1969. 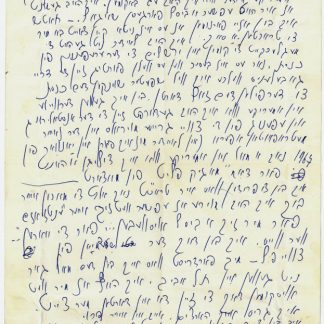