Oblong 8vo. Musical manuscript in English, on paper written in a single cursive hand in brown ink, four staves to a page. 12 leaves: blank, title, dedication, 11 pp. of music on 6 leaves, 3 blanks. Dedication to Queen Anne on second recto. In a contemporary morocco binding, exuberantly tooled and gilt by Robert Steel, arguably the finest binder in England at the time; board edges gilt, marbled endleaves, all edges gilt.

An exquisite musical manuscript, composed and bound for royal presentation on New Years' Day (then celebrated on Lady Day, March 25). Inscribed to Queen Anne of England. Signed "J.L." at the end, the pieces are marked "Overture", "Minuett" (bass), "Minuett" and "Scotch Air", one passage to be played "slow".

The violinist, singer and composer Lenton joined the ensemble of royal musicians, known as the King's Musick, in 1681 under Charles II and played at the coronations of James II and of William and Mary (cf. New Grove X, 665). As violinist, Lenton accompanied William to Holland in 1691 and contributed to the royal musical repertoire. He wrote incidental music for some dozen plays between 1682 and 1705 and accumulated the offices of Gentleman Extraordinary at the Royal Chapel (1685) and Groom of the Vestry (1708). The binder Robert Steel (fl. 1668-1711) apprenticed with Samuel Mearne and took possession of his tools after his death in 1686. In turn, one of Steel's workmen, Thomas Elliott, secured Mearne's tools and became a principal binder for the Harleian Library.

In fine condition: the splendid binding shows a repeated flower-and-foliage tool flanked by rules forming the outer frame; the panels have small fleurons and lobate tools at left and right from which spring billowy sails and branches with clusters of grapes and curled leaves; a gilt-lettered title "Lenton New Year 1703" fills the central cartouche of drawer handles; concentric circles and fleurons cover the spine. 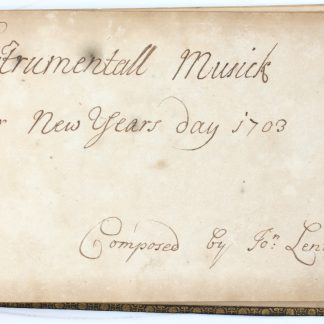