One of the earliest photographic documents of Mecca and the Hajj, preceded only by the photographs of Muhammed Sadiq Bey published in 1881 (Sotheby's, 4 June 1998: £1,250,000). Much rarer than the author's similarly titled "Bilder-Atlas zu Mekka", a portfolio of lithographs to accompany the "Mekka" books which Snouck had published after his return from the Arabian Peninsula. "Following the publication of 'Bilder-Atlas zu Mekka', Hurgronje received a letter from his doctor in Makkah, whom he had taught the art of photography. The letter contained new photographs of the hajj which were of such great interest that he decided in 1889 to publish his 'Bilder aus Mekka' [...] The photographs provide an insight into the world of Makkah's inhabitants, pilgrims from all over the Islamic world, in addition to the sharif of Makkah, the Turkish governor, and various religious and secular figures" (Badr el-Hage, p. 46f.). "In 1981 F. H. S. Allen and C. Gavin first identified the earliest Arabian photographer by deciphering his elaborately calligraphed signatures, which without exception had been erased from the plates reproduced by Snouck Hurgronje: 'Futugrafiyat al-Sayyid 'Abd al-Ghaffar, tabib Makka' (The Photography of the Sayyid Abd al-Ghaffar, physican of Mecca). This princely eye surgeon had been host to the young Snouck in Mecca immediately after the Dutchman's conversion to Islam. Snouck claimed to have taught his host how to use a camera and attributes to him (without ever mentioning his name) the pictures reproduced in 'Bilder aus Mekka'".

The first four leaves of letterpress material have been reinforced along the left edge. Prints and their mounts in excellent condition, crisp with very slight toning. Cloth portfolio a little faded; spine repaired, with 1914 De Belder bookplate on pastedown. Very rare: only two copies at auctions internationally during the past decades (the last, at Sotheby's in 2006, was incomplete, lacking all the text leaves). 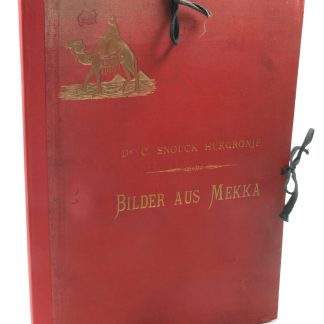