From the estate of Abel Hugo: with autographs by Lucrezia Borgia, Gaetano Donizetti, and Victor Hugo

Hugo, Victor, French writer (1802-1885). A collection of three plays by Victor Hugo, including "Lucrèce Borgia", enriched with additional collector's pieces, including a letter signed by Lucrezia Borgia, an autograph musical manuscript by Donizetti, and an original drawing by Victor Hugo.

A charming ensemble of three first editions of Victor Hugo's plays, each one inscribed by the author to his elder brother, the essayist and military writer Abel Hugo (1798-1855). When the set was auctioned at the sale of the library of the author's grandson Georges-Victor Hugo, it was acquired by Arthur Meyer, the director of the prestigious daily "Le Gaulois" and a passionate collector who was wont to enrich, or "truffle", his books with appropriate rare autographs and drawings. In this case, the addenda, bound in a matching half-calf volume, greatly surpass in value the works they accompany: 1) A precious letter by the Renaissance noblewoman Lucrezia Borgia, famous for her marriages and her affair with Pietro Bembo (signed "Lucretia Esteri de Borgia"), written in recommendation of Hector Beringero to the poet Antonio Tebaldeo (1463-1537), secretary to Francesco II Gonzaga, Marquess of Mantua (later Lucrezia's lover). Meyer had acquired this outstanding document from the collection of Alfred Morrison (cf. Catalogue of the Collection of Autograph Letters and Historical Documents Formed Between 1865 and 1882 by Alfred Morrison, 1883, p. 100).

2) Almost equally striking is the original, highly expressive pen-and-ink drawing by Victor Hugo, showing the dark shape of a portly figure holding a candle (an illustration of Act III, Scene 1 of his 1843 play "Les Burgraves"), captioned by the artist in his own hand: "Mm. Mélingue criant: Caïn! de la Coulisse". In the original production, the actress Rosaline Mélingue had played the role of Guanhumara, providing the off-stage voice for the eerie scene.

3) Also included is a letter by J.-F. Mocquard, chief-of-staff to Napoleon III, addressed to Auguste Romieu, the directeur des beaux-arts, concerning matters of theatrical censorship (including Hugo's play "Lucrèce Borgia"). 4) The associations are reinforced in an expressive charcoal drawing showing Victor Hugo reading to his brother Abel the first act of "Lucrèce Borgia", inscribed in pencil to the collector by the artist L. E. Fournier: "A M. Arthur Meyer très cordialement". 5) Finally, Meyer was able to include a fragment of Gaetano Donizetti's original manuscript of his 1833 opera "Lucrezia Borgia", which he had based on Hugo's play. 6) At the very end are two brief notes by Victor Hugo in which the author instructs his publisher Renduel to issue to the bearer copies of his works, including "Lucrèce Borgia".

Provenance: bookplates of Arthur Meyer and Jean Inglessi, as well as an additional monogrammed bookplate. Last in the collection of Pierre Bergé (1930-2017). 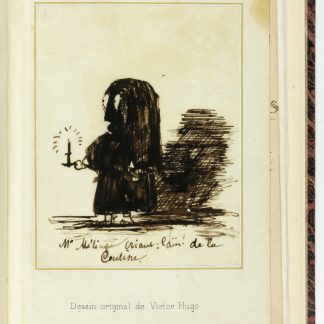