Complete set of all the articles published by the Royal Asiatic Society of Great Britain and Ireland in the years 1824-1834 under the name "Transactions". In 1835 the journal would continue under the name Journal of the Royal Asiatic Society. The society was founded in 1823 and received its Royal Charter in 1824 for "the investigation of subjects connected with and for the encouragement of science, literature and the arts in relation to Asia" (website Royal Asiatic Society). The set consists of three volumes, published in two or three parts, each containing several articles on a wide variety of subjects: archaeology, religion, philosophy, languages, scripts, coins, inscriptions, and occasionally natural history and medicine. The areas covered are China, India, Southeast Asia and Indonesia. The lithographed plates illustrate temples, statues of gods, inscriptions, scripts, coins, maps, etc. Some half-titles slightly browned, but overall in very good condition, wholly untrimmed and mostly unopened. Paper wrappers slightly frayed along the extremities. 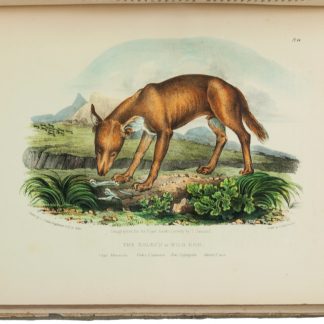