An Austrian Painter, Sent to Siberia

An extensive correspondence between Schrötter, detained at the POW camp Blagoveshchensk in the Amur region and several other camps, and his parents and friends. One of his earliest postcards is written from Repinsk on the Volga: "Arrived safe and sound, waiting for onward transport. Onion-domed churches, shining with gold, steamers on the river. Troikas. In the midst of Tolstoy's country [...]" (15 Aug. 1916). In spite of circumstances, the first Christmas as a prisoner of war appears to have been tolerable ("With a friend I wrote a Christmas puppet show, we wrote a play and staged it on Christmas Eve", 4 Jan. 1917). A month later, he reports: "Working on languages every day and drawing, so time is not wasted, but put to good use. Also, play the guitar" (2 Feb. 1917). The days are monotonous, but not unbearable: "Remain healthy, reading, painting, and waiting. The latter I do with much patience, an art which may be acquired in time […] But how much longer my sojourn here will last, is quite unknown [...]" (to his uncle in Munich, 13 Jan. 1918). Two cards are addressed to Alfred Kliefoth (1889-1969), posted to the American embassy at St Petersburg as a military observer, from whom he requests a shipment of books in German, "if possible light and yet earnest reading" (Romanow-Borisoglepska, 28 Dec. 1916).

After his release, Hans Schrötter von Kristelli worked in Chicago and New York as an art teacher and painter of frescoes; he later moved to Graz, where he created several monumental murals. 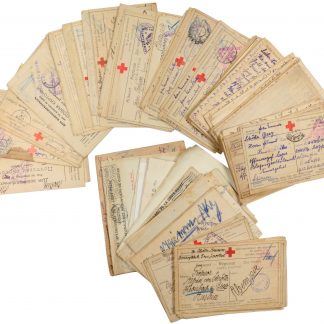