First edition. A treatise on political theory exposing liberal if not democratic principles for a republican city government, with much attention devoted to public administration, economic policy, the advancement of agricultural production, etc. Cavalcanti (1503-62), a Florentine scholar, historian and diplomat, is best known for his compendium of classical rhetoric (Retorica, 1559) in which he emphasized its practical rather than its literary meaning. After the assassination of Alessandro de' Medici in 1537 he left Florence and lived in Ferrara and Rome, serving as a diplomat for Pope Paul III, and died in Padua. This treatise was posthumously published by Sebastiano Erizo and reprinted several times, with at least three editions in the 19th century. 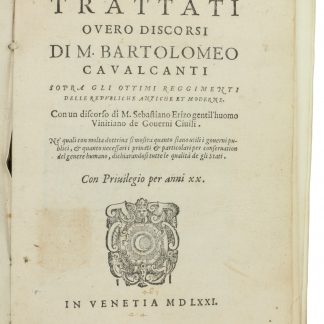