A finely bound presentation copy from the composer to the dedicatee. Anton Wallerstein (1813-92) was a virtuoso violinist and composer. Born in Dresden to a family of Jewish merchants, he first received violin lessons at an early age and began to play at local inns and private gatherings before making a concert debut at fourteen in 1827, establishing his career as a musician. Though still a teenager, he began a concert tour through Germany and at sixteen attained the post of violinist to the Dresden Court Ensemble. In 1832 he held a similar position in Hanover and it was through this employment that he was to dedicate his Opus 8 to his patron the Princess Augusta of Hesse-Kassel, Duchess of Cambridge (1797-1889).

The work contains six settings to German poets: 1) Goethe's "Romanze aus Erwin und Elmire Romanze"; 2) Antoine-Francois-Claude Ferrand's "Der Rosenstrauch"; 3) Emil Reiniger's "Sehnsucht"; 4) August Schumacher's "Der Schiffer"; 5) Franz von Gaudy's "Das Trauerhaus"; 6) Julius Moser's "Der Mond und Sie!" (uncredited). Until 1837, when they moved to London, Adolphus Duke of Cambridge and his wife Augusta lived in Hanover, where the Duke was Governor General. Augusta was very keen on music and the theatre, so this special copy of Wallerstein's composition probably travelled to London with them. The same year Anton Wallerstein also seems to have lost his post at Hanover, anti-Semitic issues having been indicated as the reason, but in general he had a fairly good career as a travelling violin virtuoso in Germany and Britain, publishing more commercial, if probably less cultured, polkas and waltzes.

OCLC locates one copy at the British Library. 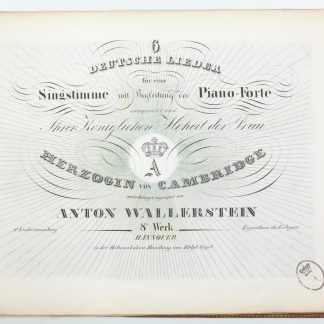