Complete with more than 80 views

Folio (230 x 350 mm). Parts 1 and 2 (of 4) in one volume, each with separate title-page printed in red and black. (8), 163, (9), 12 pp. With engraved frontispiece, engr. portrait, 2 folding engr. maps, 46 double-page-sized or folding engr. views of cities and fortresses, naval battles, historical scenes, equestrian portraits, plants, etc. (the Tower of Babylon on two unconjoined plates), 3 engravings in the text, and 12 woodcuts in the text (4 of which are full-page). (4), 140, (4) pp. With engr. frontispiece, 2 double-page-sized engraved maps, and 36 mostly double-page-sized or folded views and plates (including two plates showing two smaller views each). 18th century red half calf over marbled boards.

Second editions of the first two parts of Wagner's grand description of Hungary, the Ottoman Empire, the Middle East and the Orient. First published in 1684/85, the work catered to a rapidly growing interest in eastern geography and all things oriental in the wake of the 1683 Battle of Vienna and the ongoing Turkish War. While the author would later expand the scope of his work to include India and East Asia, the present set covers the kingdom of Hungary (still largely under Ottoman rule), the Balkan states, the Mediterranean and Anatolia, the Holy Land, Syria and Palestine, Mesopotamia, Assyria, Chaldea, as well as Arabia and parts of Africa. Apart from the principal fortresses in Hungary, views include the Church of the Holy Sepulchre in Jerusalem, the Egyptian pyramids, Constantinople, Vienna, Rome and Venice, Lepanto, Cairo, Aden, Damascus, Sissek, Nauplia, and Kotor. Camels and crocodiles are illustrated, as are the tamarind tree and other tropical plants, with accompanying descriptions of the Turkish flora and fauna, the Ottoman court, manners, and potentates. An extensive chapter in pt. 1 (pp. 99-109) discusses Arabia, including Mecca and the Hajj.

Binding somewhat rubbed and scuffed. Paper insignificantly browned; untrimmed as issued. A near-contemporary note of acquisition on the pastedown states that the book was bought thus for 8 guilders in Amsterdam on 19 September 1924 from the local bookseller Samuel Schönewald ("Ao. 1724 den 19ten Sept. in Amsterdam von dem Buchführer Samuel Schönewaldt mit den 2ten Theil zusammen gekauft vor 8 fl."). Latterly in the library of the Viennese collector Werner Habel (1939-2015), with his handwritten and stamped ownership, dated 1978, to the pastedown. Very well preserved.

Even single volumes are usually not encountered complete with all plates as present; not a single copy with all four volumes in the trade or at auctions of the last decades. The only comparable copy (still lacking vol. IV) was auctioned in 2009 (Sotheby's London, 13 Nov. 2008, £20,000). 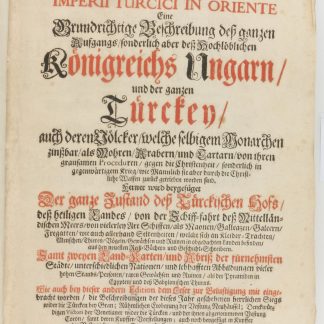