Elaborate study of the "Militärgrenze" (Military Frontier), a borderland of Imperial Austria set up for national defence against the Ottoman Empire, by Hietzinger (1786-1864), a civil servant in the Court Council of War. "Of lasting historical value" (cf. Wurzbach). The map shows the area of the Military Frontier as well as the positions of the infantry and cavalry regiments stationed there. The folding tables provide details on the size and population density of the area, various 18th century organisational reforms, as well as temperature and minerals of the Baths of Mehadia (Baths of Hercules) in modern Romania. The first part was published with a dedication to Archduke Ludwig Joseph of Austria, a younger brother of Emperor Franz Joseph I. The index of subscribers in volume I, sometimes bound after the XX pp. of preliminaries, is bound at the end of the present copy. Author's initials and shelfmarks to the flyleaves of all three volumes.

A few paper flaws to the index of volume I, not touching text. A very well preserved, appealingly bound copy. From the library of the Viennese collector Werner Habel, with his stamped and signed ownership to flyleaves, dated 1977. 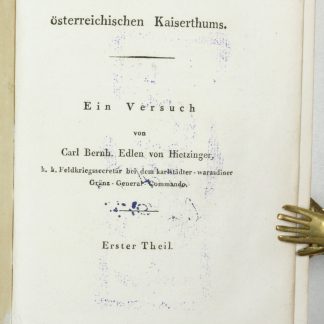