Vaelckeren, Johann Peter von. A Relation or Diary of the Siege of Vienna [...] Drawn from the Original by His Majestie's Command.

The popular report on the 1683 siege and liberation of Vienna by the Imperial Councillor of War, Vaelckeren, who was sick in Vienna in 1683, when the Turks enclosed the capital. Originally published in Latin, the account saw numerous reissues and translations. The plans show the Ottoman camp around Vienna with the surrounding landscape and towns, as well as the battle formation on 12 September 1683.

Pages 61-64 skipped in pagination, text continuous. With a handwritten insertion in the margin of p. 103 ("of that quality"). Handwritten ownership by "Fran[cis] Parry" to flyleaf. Sold by Gilhofer and Ranschburg in 1913.

Hinges starting. Paper evenly browned throughout, brownstained in places. From the library of the Viennese collector Werner Habel, with his signed and stamped ownership, dated 1976, to the front pastedown. His note of acquisition from the same year is loosely inserted. 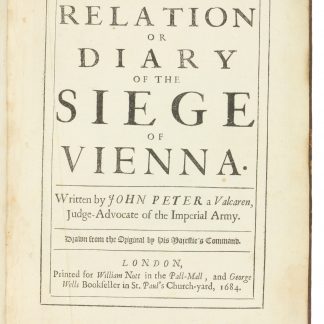