The first complete edition of this "curious book" (cf. Graesse), a "state handbook of the military and civil organisation of the late Roman Empire" (cf. Hieronymus). Compiled anonymously around 410, the classical text and illustrations were passed on in several manuscripts, first appeared in print in abridged form in 1529 and were published in the present version by the classicist Gelen (ca. 1498-1554), who worked as an editor and translator at the Froben printing office. The woodcut illustrations were created by Conrad Schnitt (1495-1541), except for pp. 6f and 23 (Imperium Orientale, Imperium Occidentale, Constantinople), which probably originate from the hand of Hans Rudolf Manuel Deutsch (1525-71). They show, inter alia, allegoric depictions of parts of the Empire, the insignia of court, civil and military authorities, as well as statues, small buildings and books. Includes the petition to the emperor on warfare ("De rebus bellicis"), the corresponding illustrations, not all of which by Schnitt, showing chariots, ships and other military equipment. The treatise on civil and military organisation by Andrea Alciato, the topographic description of classical Rome by Publius Victor and the conversation between Emperor Hadrian and the philosopher Epictetus can be found towards the end.

Bound with this is a genealogical work on the origins of Roman families by the Austrian historian Strein von Schwarzenau (1538-1600), giving a short description of each family, with a family tree.

With contemporary ownership of the library of the Piarist school in Schlackenwerth (now Ostrov) to the title-page; a previous ownership crossed out. A library shelfmark to the pastedown. A page marker to the final leaf of the "Notitia". Binding somewhat brownstained. Paper evenly browned throughout with very slight brownstaining and waterstaining to a few pages. From the library of the Viennese collector Werner Habel, with his signed and stamped ownership, dated 1978, to the pastedown. 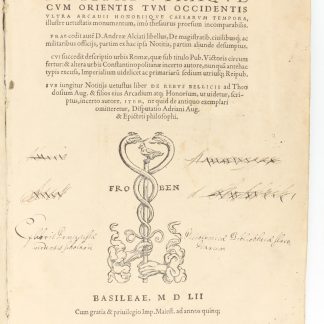