Complete run of this series of illustrated news sheets issued during the Great Turkish War: of the utmost rarity

A very rare and extraordinarily interesting volume published as a series of bi-weekly news sheets in the wake of the 1683 siege of Vienna, consisting of single sheets, each with a title ("Türckis. Estats- und Krieges-Bericht") and number, a woodcut on the recto, and from no. 76 onward a date (26 May through 22 Dec. 1684). This series of more than 130 large woodcuts by Melchior Lorck, the Danish draughtsman who only recently was hailed as "one of the sixteenth century's most original artists" and to whose life and work the publication of a five-volume monograph by E. Fischer (cf. below) paid ample tribute, provides us with the hitherto most extensive western-commissioned visual record of Ottoman society and Islamic culture in general. It is here published for the first time with the accompanying text written by the artist himself during two extended stays in Constantinople. Only two copies recorded at auction, the last one being incomplete, with three leaves missing, and heavily restored with the title-page and map partly supplied in facsimile (Christie's London, 13 July 2016, lot 188, £74,500).

The editor is suggested to have been E. W. Happel, an active miscellaneous writer of the period best known for his "Thesaurus exoticorum". In the introduction he states that the aim of the publication was to present a report on Turkish society, customs, beliefs, manners, as well as fortifications and recent battles. The work is prefaced by an account of the Battle of Vienna, including an engraved map showing the territories between Vienna and Constantinople and an engraved view depicting the siege. Lorck's illustrations fall into several groups: first, those of people and things, consisting of pictures of natives of different parts of the Ottoman Empire, different grades of person and trades, with a few plates of horses or things (no. 87: a Tartar covered wagon; no. 92: reproductions of Turkish coins). Then comes a group of views of towns, Damascus, Smyrna (93-98), portraits of lady sultans (99-104), followed by some more individual types (including a dervish), then views of the great mosques of Contantinople, including the Hagia Sophia and the Sultan Ahmed Mosque (113-122), then more pictures of animals (horses, including an Arab horse, camels), individuals and things such as Turkish standards (123-136). The accompanying text describes each image in some detail and is printed across the page. It is followed (printed in a smaller type and in two columns) by contemporary news dated from 2 September to 24 December 1684.

A complete, continuous run of the first 136 issues of these news sheets as issued from 1683 onwards and jointly re-issued with a general title-page and prefatory matter in 1685; the final, double page issue (no. 137, titled "Das Türkische Kirchen-Gemählde") was obviously never bound with this set. Variously browned; slight worming to pastedown, flyleaf and title-page. Old ownership of Friedrich Engl of Wagrain on title-page; later ownership "Seiffenburg" to flyleaf. Latterly in the library of the Viennese collector Werner Habel (1939-2015) with his ownership stamp. An excellent, genuine copy in its original binding, especially in comparison with the few copies traceable in libraries and the two recorded at auction. 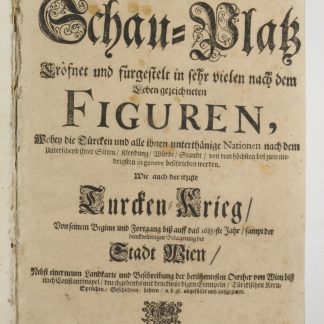