Jurjani (d. 1136) "went to live in Khwarizm in 504/1110 and became attached to the Khwarizmshahs Kutb al-Din Muhammad, to whom he dedicated his 'Dhakirah', and Atsiz b. Muhammad [...] His 'Dhakirah Khwarizmshahi', probably the first medical Encyclopaedia written in Persian and containing about 450,000 words, is one of the most important works of its kind; it also exists in an Arabic version, and was translated into Turkish and (in an abbreviated form) into Hebrew" (Encyclopaedia of Islam).

Modelled on the Qanun of Ibn Sina (Avicenna), the "Dhakirah" is divided into ten books, covering: definition and utility of medicine, and the structure and powers of the human body; health and disease, in general, including causes and symptoms of disease, and accidents of the body; the preservation of health; diagnosis, crisis and prognosis; fevers and their treatment; local diseases and their treatment; tumours, ulcers and so forth; the care of the external parts of the body (hair, skin, nails, and so on); poisons and antidotes; and simple and compound drugs.

Binding stained and rubbed. Various seal impressions (some erased) on first and second leaves and at end of text. Paper shows some splashes, soiling and staining, first leaf re-attached and with loss of one or two words on verso (sense recoverable), margins of last few leaves strengthened, but generally in good, sound condition. Provenance: Abdul-Malik bin Mahmud al-Mausuli al-tabib ("the physician"), with his ownership inscription dated 5 Rajab 913 AH (10 Nov. 1507) at the Mu'ayiddi hospital in Mosul; the distinguished German ophthalmologist and Arabist Max Meyerhof (1874-1945), with his bookplate on the front pastedown.

GAL I, 487 & S I, 889. Cf. Keshavarz, A descriptive and analytical catalogue of Persian manuscripts in the library of the Wellcome Institute for the History of Medicine, pp. 52-54 & p. 149. Fihrist records no copies of the Arabic translation. 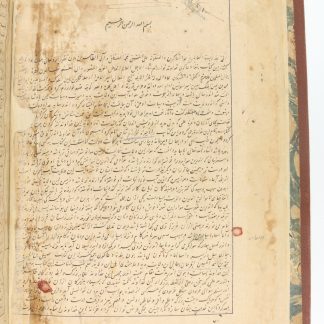