Opposition to Imperialist War and the Birth of the Comintern

No place or date, but apparently August 1915.

Important autograph draft letters signed about the Zimmerwald Conference, calculating how many votes the central committee of the Bolshevik faction will have at the conference, criticising Karl Radek's proposed address, of which he has a copy, for its lack of references to the fight against chauvinism, referring to Schklowsky, to the Swiss socialist Robert Grimm, and offering advice to his unidentified correspondent.

The Zimmerwald Conference, later to be called "the founding myth of the Soviet Union", was held at the "Beau Séjour" Hotel in Zimmerwald, Switzerland, from 5 to 8 September 1915. It was the first of three international socialist conferences convened by anti-militarist socialist parties from countries that were originally neutral during World War I. Among the 37 members were Karl Radek, Leo Trotsky, Grigory Zinoviev, and Lenin. With the Zimmerwald Conference began the unravelling of the coalition between revolutionary socialists (the so-called "Zimmerwald Left") and reformist socialists in the Second International. 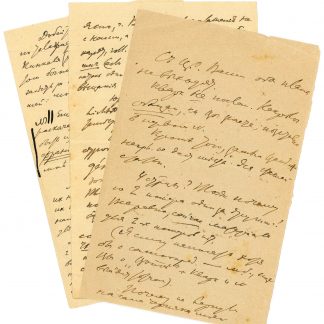