First and only edition: a substantial torso of the League of Nations Treaty Series (LNTS), the League's officially published collection of treaties and other international engagements. Begun in 1920, it was discontinued in 1946 (following the dissolution of the League) after 205 volumes. The present set includes numerous important agreements reached during the interwar period between the western powers and those of the Middle East, such as Saudi Arabia, the Trucial States, Yemen, and Oman.

To cite but a few examples, vol. 71 includes the full Arabic and English text of the "Treaty of Friendship and good understanding between his Britannic Majesty and his Majesty the King of Hejaz and of Nejd and its dependencies. Signed at Jeddah, May 20, 1927", authorized by Faisal Abdul-Aziz al Saud, Abdul-Aziz ibn Abdul-Rahman al Saud and Gilbert Clayton, pp. 133-164, also noting: "Article 6. His Majesty the King of the Hejaz and of Nejd and its Dependencies undertakes to maintain friendly and peaceful relations with the territories of Kuwait and Bahrain, and with the Sheikhs of Qatar and the Oman Coast, who are in special treaty relations with His Britannic Majesty's Government", p. 154.

Vol. 115 includes the German and Arabic text as well as a French and English translation of the "Treaty of Friendship" between Germany and Hejaz, Neijd and dependencies of 1929 in Cairo which was authorized by Stohrer, Sheikh Hafez Wahba, and Sheikh Fausan El Sabek, pp. 266-270.

Vol. 8 includes the English text of the "Anglo-Muskat commercial treaty": "[...] the Treaty of Friendship, Commerce and Navigation between Great Britain and Oman, signed on the eighth day of Shaban 1308 H., corresponding to the 19th March, 1891, will be prolonged by this writing notwithstanding all or any correspondence between His Late Highness Syud Faisal bin Turki and the Glorious British Government [...]" authorized by Taimur bin Faisal, Sultan of Muscat and Oman and R. Wingate, I.C.S.

Vol. 25 includes the English text of the "Anglo-Muscat Treaty prolonging for one year from February 11, 1924", authorized by R. G. Hinde and Nadir, Muhammad bin Ahmad, Rashid, and Zubair in Muscat, pp. 388-391.

Vol. 168 includes the "Agreement between Great Britain and Muscat renewing for a further period of one year from February 11th, 1927, the Treaty of Friendship, Commerce and Navigation of March 19th, 1891 [...]" in Arabic, French and English authorized by Said bin Tamur, Sultan of Muscat and Oman, and Major R. P. Watts, I.A., pp. 230-233.

Vol. 96 includes the "Agreement between Great Britain and Mascat renewing for a further period of one year, from February 11, 1929, the above Treaty of March 19, 1891" in Arabic, English and French, authorized by B. S. Thomas, G. P. Murphy, and Hadji Zuber bin Ali "on behalf of his Highness Sayid Sir Taimur bin Faisal, K.C.I.E., C.S.I., Sultan of Maskat and Oman", pp. 194-197. Numerous further relevant treaties are referenced in the copious indices included with the series.

Three sets of indices bound in separate volumes, the others bound with the treaties. Some of the original wrappers somewhat damaged when not included in the binding, but well preserved. Removed from the Champlain Library of the Université de Moncton, Canada (their shelfmarks to spines and stamps to edges); previously in the library of the University of Washington, Seattle, International Fisheries Commission (their stamps to some wrappers). 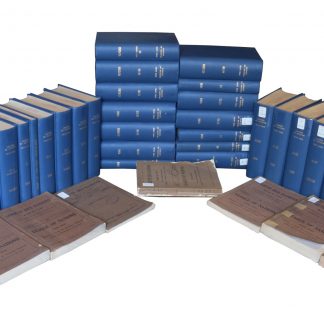