[Costume drawings]. An album of eight fine watercolour drawings depicting the costumes of Constantinople and the Ottoman World.

An album of eight splendid costume paintings, by a talented, unidentified artist who may have been a member of the entourage of a German ambassador to the Porte. The subjects in this collection are captioned: "Der Kriechen Patriarch" (the Greek Patriarch); "Der Türckisch Keiser" (the Turkish Sultan); "Der Türckisch Babst" (the Grand Mufti); "Türckische weiber wie sie pflegen auf der gaßen zu gehen" (Turkish women, as it is their wont to dress in the street); "Also sizen die Türckischen weiber" (Thus sit the Turkish women); "Ein Epirotische frau wie sie in Iren Heusern zu Galata pflegen zu gehen" (a woman of Epirus, as they walk about in their houses in Galata); "Ein Kriegische fraw" (a Greek woman); and "Ein Armenerin" (an Armenian woman).

Great attention to both accuracy and details is shown: indeed, the suite may be related to another set of similar drawings in the Gennadius Library (A896 B), dated to about 1573 (cf. Blackmer Cat.). There is also some resemblance in style and presentation to certain of the costume illustrations in Nicolas de Nicolay's Navigations (1568, and later editions). Although Nicolay travelled in the Levant in the 1550s and was long thought to have drawn his costume subjects from life, doubt has been cast on this view, and it is now generally considered that he drew his subjects from the work of other artists and illustrators.

A little light dust-soiling, binding with minor wear, soiling and wormholes. Provenance: from the collection of Ferdinand Sigismund Kress von Kressenstein (1641-1704), councilman of Nuremberg whose father signed the Peace of Westphalia treaty (his armorial bookplate on the front pastedown). Later in the library of Franz Joseph II, Prince of Liechtenstein (1906-89), with his armorial bookplate on the flyleaf. Latterly in the collection of Henry Myron Blackmer II (1923-88), with his bookplate to the pastedown, sold at Sotheby's in 1989 (Blackmer sale, lot 80) and purchased by Herry W. Schaefer (1934-2016). 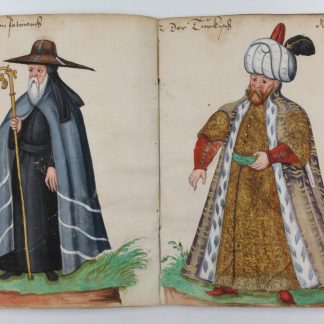