First edition of Engels' first book, written in his early twenties, with a three-page preface in English addressed "to the working classes of Great-Britain". Based on personal knowledge of the situation in Britain gained during the time he spent in 1842-43 at his father's factory in Salford, Engels exposed the horrific living conditions which the Industrial Revolution had entailed for workers in large industrial cities such as Manchester and Liverpool: mortality from disease was four times that in the surrounding countryside, and mortality from convulsions was ten times as high. Originally addressed to a German audience, the book is considered a classic account of the universal condition of the industrial working class during its time. It was not translated into English until 1887, as "The Condition of the Working Class in England in 1844".

"Our image of Manchester capitalism, with the owners of the means of production enjoying their life unfettered by legal, organisational or moral restraints, is based on these descriptions by Engels" (cf. Bönig, p. 13). His book "made a crucial contribution [to the workers' self-empowerment] because it provided so detailed an account of their destitution, thus showing the newly arisen competitive capitalism in a new light that prompted them to take action themselves" (ibid., p. 15).

Even previous to their important meeting in the late summer of 1844, Marx had read and been profoundly impressed by Engels' article "Umrisse zu einer Kritik der Nationalökonomie" (Outline of a Critique of National Economy), from which Engels' 1845 book grew, as it had been published in February in the "Deutsch-Französische Jahrbücher", which Marx had co-edited. Engels' notion that political economy revealed bourgeois society's contradictions, which in turn pointed the way to their own overcoming, would provide the framework for the future direction of Marxist thought.

Hinges professionally repaired. Some light browning throughout, mainly confined to margins, but on the whole quite crisp and clean. A remarkably well-preserved copy. 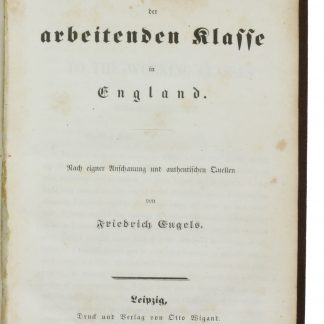