Cambodia's relations with China during the Cultural Revolution

[Mao Zedong] - Meyer, Charles / Sihanouk, Norodom, French diplomat in Cambodia (1923-2004). The Diplomatic Archive of Charles Meyer, including the relations between Cambodia and China.

This collection focuses on King Norodom Sihanouk's politics, constituted in the circles of power through Charles Meyer, his advisor for communication and public relations. Especially Sihanouk's relations to global political agents become clear during this troubled period, which shows China and Vietnam in the first row with America und France.

I. Cambodia's neighbourly relations with China during the Cultural Revolution. Documents (meetings, negotiations, audiences, protocols, delegation lists, drafts, trade agreements and speeches), some with annotations, mostly concerning diplomatic progress between Prince Sihanouk and President Liu Shaqu with his first minister Zhou Enlai in the years of 1963-65 in Beijing. One document deals with the project of the Khmer-Chinese friendship resolution. Also interesting is an analytical summary of the dialogues held on board a boat transporting the Cambodian delegation on the Yangtze. 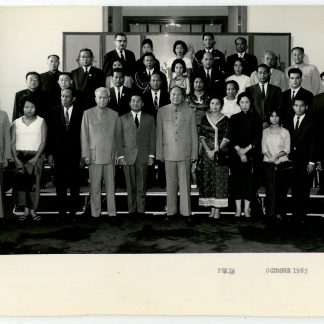