The first book about the game of football

The earliest treatise - and only early monograph - on the historical precursor to the modern game of football (or soccer), namely the game of "Calcio" traditionally played by young men in Florence's Piazza Santa Croce during the Carnival season. The book explains the mechanics of the game, provides its historical background, and describes actual games played in and around Florence in the recent past. The detailed account was first published in 1580 and reprinted in 1615, unchanged save for a new dedication and preface by the printer, Cosimo Giunti, who also reveals the author's name as Giovanni de' Bardi, Conte di Vernio.

The engraving shows a fine view of the Piazza with the players on the field immediately before kick-off. The title page shows the Medici arms: the book is dedicated to Archduchess Maria Maddalena of Austria, Grand Duchess of Tuscany as wife of Cosimo II de' Medici. 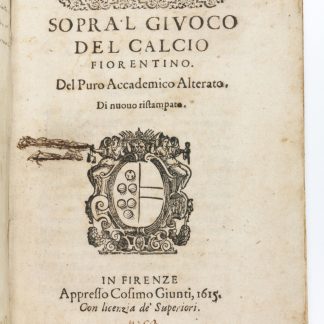