The foundation stone of the modern mapping of Arabia: the unique earliest printed map of Saudi Arabia to include the name "Arabian American Oil Co.", documenting the birth of the Saudi oil industry

Sheets, G[len] S[cott]. The Arabian Peninsula and Adjoining Areas. B-1237.

The only known example: a highly detailed map of the Arabian Peninsula, published by the "Arabian American Oil Co." in March 1942, two years before the company was formally so renamed, and the first effort to produce a large-scale map of the entire Peninsula that satisfied modern technical needs. Clearly produced in a very limited edition for internal use at the crucial, transitional moment in Arabian oil exploration, this is the earliest known map to use the name that still survives in "Saudi Aramco", issued at a time when the company was still officially Standard Oil of California.

The legend identifies railways, primary and secondary roads as well as "explorers' routes", oil pipelines, intermittent streams, airports, towns, "Arab wells", oases, "sand areas", "sabkhas", and "marsh". The Maidan-i-Naftun and Naft Safid oilfields in Iran (and the pipelines that link them to the A.I.O.C. Refinery at Abadan) are illustrated, as are the Kirkuk oilfield and the pipelines running from there to Haifa and Tripoli. Dammam and Dhahran, the sites of the first commercial oil wells in Saudi Arabia, also feature on the map. Aside from that, however, there is no illustrated oil development in the Middle East: the map effectively illustrates the blank slate that was Arabian oil exploration in the early 1940s. On the coast of what was then Trucial Oman, Sharjah, Dubai (with airfield) and Abu Dhabi are identified; the areas to the southwest of Abu Dhabi City are labelled "Sabkha es Salmiyah" and "Taff". Shows adjoining areas from the Bosporus to Somaliland and the USSR.

The "compiler and tracer" (cartographer and draughtsman) is identified as the Aramco engineer G. S. Sheets; separate fields to indicate "checked by" and "revisions" remain blank. Sheets had joined Aramco's predecessor, the California Arabian Standard Oil Company, in 1939 and immediately began work in Dhahran as a geological draftsman in the Production (Exploration) department. Upon his return to the U.S. he prepared several geological maps including the present one and acted as liaison with the Army Map Service. In 1942 he became attached as a civilian to the U.S. Army Corps of Engineers, Army Map Service, but he returned to Arabia in 1944 and in 1955 became staff assistant to the director of Concession Affairs.

In excellent state of preservation. Extremely rare: OCLC locates only two examples, both of which appear to be photocopies (Library of Congress and American University of Beirut). While the large 1963 map of Arabia that succeeded this, also produced by Aramco geologists, has occasionally appeared in the trade, no other original of this early map could be traced in libraries or in auction or trade records. A unique survival. 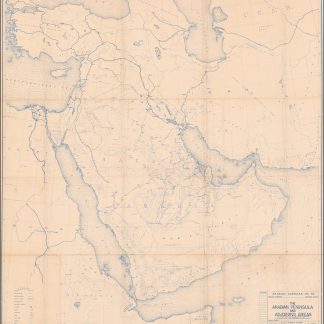