2 sheets (A, combined map of geography and geology; and B, geography only) in full colour, both covering the same section the Arabian Peninsula. Ca. 103 x 103 and 83 x 100 cm, folded. In original printed envelope. English and Arabic. Scale 1:500,000; relief shown by hachures and spot heights.

The only two sheets of the groundbreaking series covering today's UAE - the remaining parts of the Emirates were skipped in the survey prepared by the U.S. Geological Survey and Aramco and were therefore never published. The first to produce a full series of geological and geographical maps of the Kingdom of Saudi Arabia, the venture was instrumental in establishing the country as a major global force in the production of natural resources and must count as "a unique experiment in geological cooperation among several governments, petroleum companies, and individuals" (Seager/Johnston).

The area here covered is the eastern portion of Qatar and the westernmost area of Abu Dhabi, including the island of Sir Bani Yas and the adjoining border territory of Saudi Arabia. Indeed, this is the only map in the series to show any portion of today's United Arab Emirates: the land to the eastward was still beyond the focus of oil exploration in the mid-1950s and was omitted from the mapping project.

The importance of the present map within the series is underscored by the fact that its joint authors, R. A. Bramkamp and L. F. Ramirez, were Aramco's foremost geologists. Together with Glen F. Brown, a veteran of the industry who also had been in the region since the 1940s and who would oversee the venture, Bramkamp had in February 1955 planned the entire programme, laying down everything from the scales of maps, the areas of responsibility, and types of terrain representation to the bilingual names. As Aramco's chief geologist, Bramkamp was responsible for the compilation of the areas within Arabia where the sediments crop out. This responsibility fell to Ramirez following Bramkamp's early death in September 1958.

The surveyors divided the Peninsula into 21 quadrangular sections (numbered I-200 through I-220), each to cover an area 3 degrees of longitude and 4 degrees of latitude. All maps were produced on a 1:500,000 scale and issued in two series: a combined map of geography and geology (marked by the appendix 'A') and a map of geography only ('B'). "High altitude photography [...] was [...] completed in 1959 [...] This controlled photography resulted in highly accurate geographic maps at the publication scale which then served as a base for the geologic overlay. The topography of the sedimentary areas was depicted by hachuring and that of the shield region by shaded relief utilizing the airbrush technique. The first geographic quadrangle was published in July 1956 and the last in September 1962 [...] The first of the geologic map series was published in July 1956 and the final sheet in early 1964" (Seager/J.).

Although it was the search for oil, gas and minerals that "was ultimately to drive geological survey work across the region [...], in its early years it was the need for water that was the catalyst for Saudi Arabia's resource exploration. In 1944 King 'Abd al-'Aziz approached the United States for a technical expert who could assist with the identification and plotting of the kingdom's natural resources, particularly its groundwater reserves [...] By 1954 the Saudi Ministry of Finance, USGS and Aramco were working together to produce the first full series of geographic and geologic maps of the country. The first of their type in the Peninsula, these were published [...] in both Arabic and English versions, and the information they contained formed the basis of subsequent Saudi national development plans" (Parry). The project was considered highly important by Ibn Saud, and its aims encompassed all aspects of cartography. It was to enable not only the search for natural resources but also aid in advances for agriculture, civil and military engineering and general infrastructure projects. The results were seminal for the mapping of the region: "To this day, all modern maps of the kingdom trace their roots back to these first publications" (ibid.).

Lower left corner of 'B' map chipped (no loss to text or image); printed sleeve somewhat rubbed with a 1960s few pencil annotations, otherwise a very clean set in excellent state of preservation. A single map of the quadrangle to the immediate west of this, I-208 (the 1958 'A' sheet only), showing Dhahran and Ras Tanura, is currently being offered on the market at £25,000. 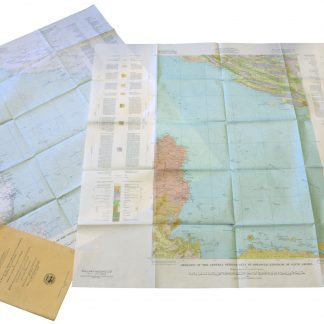