A commentary on Ibn Sina

4to. With woodcut device on title-page. Contemporary limp vellum.

Rare first and only edition of a commentary on book I, fen I of Avicenna's Canon, including the Latin version of the text by Andrea Alpago and Jacob Mantino. Like most of Oddi's work it was published posthumously by his son Marco degli Oddi. "Although in the body of his work much of the time he treated Avicenna with nominal respect, this was apt to be achieved through a procedure of deducing Avicenna's 'real' opinion by consulting Galen. In addition, Oddo Oddi had a long-standing interest in the problem of securing a better Latin text of the Canon (he was on the academic committee that approved Alpago's work and he encouraged Graziolo many years later); he based his exposition on Alpago's text, which he claimed to be in general use, and rather frequently compared the latter's renderings with those of Gerard of Cremona and Jakob Mantino." (Siraisi). Before practicing Medicine in Venice, Oddo degli Oddi (1478-1558) taught classics (Greek and Latin) at the University of Padua. Eventually he went back to Padua, where he taught Medicine. He was a committed supporter of Galen's doctrines.

With owner's inscription on fly-leaf dated 1586, two owner's names on title-page (one struck trough) and some manuscript notes in the margins. Binding slightly wrinkled, but internally in very good condition. 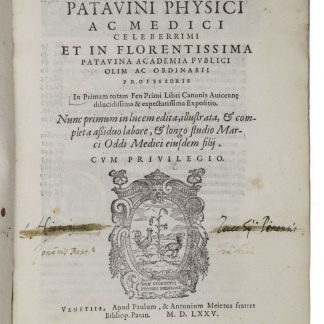