Rare, early treatise on yellow fever, in the early 19th century a poorly understood disease that was causing much sensation throughout the Austro-Hungarian monarchy and indeed the entire continent, due to several spectacular outbreaks in southern Europe. Not until the 1880s would the cause and transmission (the yellow fever mosquito) be identified correctly.

Estreicher erroneously attributes this brochure to the Spanish physician Juan Manuel de Aréjula, who had published similar works on the subject at the same time (translations even appearing in Vienna). In fact, the booklet was issued on behalf of the Austrian state ("auf allerhöchsten Befehl", at the Emperor's command) and distributed free of charge among general practicioners and surgeons in the Austrian countries so as to disseminate the relevant medical knowledge as quickly as possible. A Polish translation was published that same year. 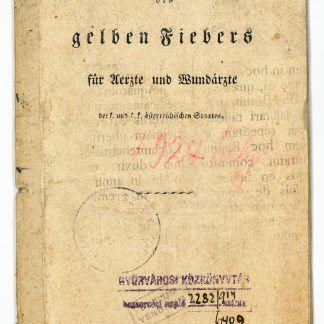