A Turkish political memoir on the Ottoman-Russian War

First German translation of the "Layiha" of Ahmet Resmî bin Ibrahim Giridî (1700-83), a Greek-Ottoman statesman and diplomat and Turkey's first ambassador to Berlin. A political memoir on the Ottoman-Russian war of 1768-74, one of the few existing accounts from the Turkish perspective. Between 1772 and 1773 the Ottomans undertook ultimately abortive negotiations with the Russians during which Ahmed Resmi pressed for peace, arguing that the Russians were badly overextended and that both sides should recognize their military and territorial limitations. Such thinking was still novel in Ottoman administration and represents the good understanding of the balance of power diplomacy which the author had gained at the courts of Vienna and Berlin.

The oriental scholar H. F. Diez (1751-1817) had trained as a jurist but, bored by his administrative occupation, soon left the Prussian civil service and in 1784 went to Constantinople as Frederick the Great's chargé d'affaires at the Sublime Porte. He was ennobled after only two years of successful diplomatic service. Recalled in 1790 on the eve of the Russo-Turkish War, the self-confessed Turkophile soon retired to the life of an independent scholar and book collector in Berlin. His orientalist publications captured the attention of the learned world, and he moved in the circles of Goethe, Gleim, and Alexander von Humboldt, though largely outside the contemporary tradition of academic oriental studies. "Even if many aspects of his scholarly life are almost forgotten, his merits, especially for the development of Turkish studies, are noteworthy [...] His works, almost completely printed at his own expense, reflect his interest in the origins of Asian cultures, literatures, and politics, as well as everyday issues and ethics" (J. Gonnella et al. [ed.], The Diez Albums [Leiden, 2017], p. 58, 76). 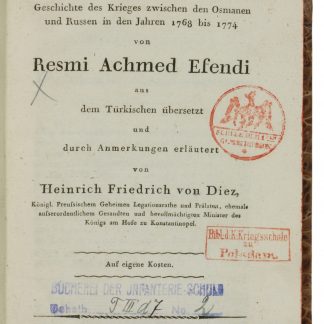