Poster (ca. 52.5 × 32.5 cm) printed in black and red, with an image of four armed Arabian horsemen, with Arabic text above and below, and with the title in Spanish, French and English at the foot of the poster, together with the logo of the OSPAAAL.

Rare propaganda poster of the OSPAAAL, the Organization of Solidarity with the People of Asia, Africa and Latin America, designed by Olivio Martinez. The poster depicts four Arabian (Bedouin?) men on horseback, holding guns and galloping towards the viewer, with the text "Unity of the Arab peoples - Nationalization of oil" in Arabic above and below the image. At the foot of the poster is the logo of the OSPAAAL, flanked by the same text, given English, Spanish and French. OSPAAAL is a socialist Cuban political movement against imperialism and to defend human rights. The organization was founded in 1966 and was especially active in less developed countries. The posters were often stapled into copies of Tricontinental, the organization's magazine.

With only a small fold in the lower right corner, otherwise in very good condition. 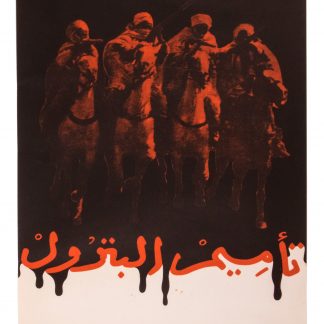