Benezet, [Anthony]. Some Historical Account of Guinea, its Situation, Produce, and the general Disposition of its Inhabitants. With an Inquiry into the Rise and Progress of the Slave Trade, its Nature, and lamentable Effects.

First printed in Philadelphia the year prior, this title was intended specifically as an "impartial enquiry" to assess the oft-cited pro-slave trade justification that "the slavery of the Negroes took rise from a desire, in the purchasers, to save the lives of such of them as were taken captives in war, who would otherwise have been sacrificed to the implacable revenge of their conquerors". By examining a variety of first-hand accounts of trade and exploration on the African continent, Benezet sets out to fully discredit this assertion. He does this through outlining the influence of European factors and trading posts on local conflict, in particular emphasizing the corrupting influence that tax on slave ships had on local rulers. Alongside this, the frank descriptions of African society, government, agricultural and religious practices is designed to give a humanizing portrait of African people in their native land. This is then vehemently contrasted with accounts of the conditions of slavery, the circumstances of transportation and the treatment of enslaved people in the colonies.

Benezet published a series of pamphlets, at his own expense, explicating the horrors of slavery with a view to its abolition, most notably "A Caution and Warning to Great Britain and her Colonies […]" (1767). Ragatz writes that along with John Wollman, Benezet was one of the "chief early anti-slave trade agitators in the new world […] Benezet carried on universal propaganda and was in very close touch with British Abolitionists. This work gave young Thomas Clarkson most of the information he used in writing the Cambridge Latin prize which resulted in dedicating his life to the abolition movement". 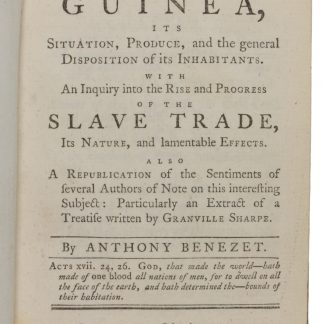