On finite and infinite dimensions

Hawking encloses an improved version of a paper co-authored with George Ellis (the work, not present here, was ‘The Cosmic Black-Body Radiation and the Existence of Singularities in Our Universe’, The Astrophysical Journal, Vol. 152 (April 1968), p. 25], noting that the ‘calculations of the convergence condition have been redrawn’. Hawking enjoyed his visit to Maryland, which prompted some ideas about Misner incompleteness that he intends to put into a paper when he has time. He continues: ‘I heard Stan Deser outline his proof that mass is positive definite. He claims that a function whose only critical value is zero and which has a local minimum there is necessarily positive elsewhere. It seems to me that there are counter examples to this in finite dimensions – not to speak of the infinite dimensions case’. A reminder about payment for his last week at Maryland and travel expenses ends the letter, Hawking professing himself embarrassed, but mentioning it in case the cheque might be missing in the post.

Stephen Hawking first met the American physicist Charles W. Misner during the latter’s 1966-67 visit to Cambridge at the invitation of Hawking’s postgraduate supervisor Dennis Sciama; the two became close, and Hawking visited Misner at his own institution, the University of Maryland, at the end of 1967. Hawking’s work on singularity theorems, which he first published in his 1965 doctoral thesis, overlapped with the research Misner was undertaking on geodesical incompleteness, a notion at the centre of the concepts Hawking was developing with Roger Penrose (the ‘Penrose-Hawking singularity theorems’). Here, Hawking seemingly refers to a proof that another of their colleagues in the field, Stanley Deser, would publish the following year in the Physical Review Letters, in a paper entitled ‘Positive-Definiteness of Gravitational Field Energy’. 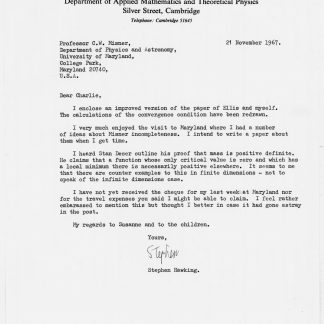