21 album leaves with 1 drawing mounted on each recto. Album: full-sheet leaves (oblong folio, 395 x 525 mm); drawings: oblong folio and oblong 4to. An album with 21 watercolour drawings on paper with views of sea coasts from the shore (240 x 310 mm to 295 x 465 mm), one with a 22nd watercolour drawing on the back with a similar view, and one with about 15 human figure drawings in graphite pencil on the back. All bear the artist's stamp on the front (Lugt 3703) and 4 are signed or initialled by the artist. Richly gold- and blind-tooled green goatskin morocco, sewn on 3 recessed cords (not aligned with the six flat raised bands on the spine), each board with a blind-tooled inner oval frame of interlaced abstracted leaves and vines, surrounded by a gold-tooled frame of similar decoration (oval inside and rectangular outside), surrounded by 2 frames of thick-thin fillets, the front board with the owner's initials in textura capitals in the centre: "A.L.", signed at the foot of the spine, "A. Giroux & C:" (last recorded in 1856), white watered silk endleaves (the paste-down in the form of a doublure). The whole in a protective folder lined with thick leather, with green goatskin morocco where it wraps around the 2 short ends, and chemical-marbled paper sides (black papier croise d'Annonay: cf. Wolfe XXI, 1-3: France, 1830s-50s), with remains of a green cloth tie on the flap.

A richly gold- and blind-tooled album (ca. 1850/56) containing 22 excellent and detailed watercolour views of rocky sea coasts, all or nearly all in New Caledonia and Peru (plus 1 graphite pencil drawing of about 15 human figures), the coastal views made from the shore. All were executed by Osmond Romieux (1826-1908), a leading amateur artist who made them during his tours of duty as a French naval officer. At least 18 have a pencil note on the back identifying the location: 15 "Nouvelle Caledonie", 2 "Pérou" (drawings 18, 20) and 2 "Callao" in Peru (drawings 17, 18). We have found no location indicated on drawings 3 (with views on both sides), 8 and 19 (with figure drawings on the back). Most of the drawings were made from the sea shore, looking out over both the sea and the nearby coasts, nearly all with rocky cliffs or outcroppings and some with trees or other plants. Many were made along bays or inlets where one can see the coast on both sides and the water in one view. Some show fortifications or other buildings, a few show boats in the water or on the shore and several show people on the shore, all or nearly all in European dress. Drawings 2, 8, 15 and 17 are signed or initialled by the artist.

No drawing in the album bears a date, but the album shows no signs of other items having been removed, so the drawings probably date from before or soon after the album was manufactured. The album leaves are made of wove paper with no watermark, but A. Giroux & Cie is not recorded after 1856 and the binding style suggests the album is not much older. Most of the drawings are made on thick wove paper with no visible watermarks and with a rough surface texture much like many of today's watercolour papers. Drawing 4 is on thinner and smoother wove paper with no watermark visible and drawings 9 and 11 are on laid paper watermarked (in the centre of a half-sheet): grapes on a crowned shield (20 grapes plus stem, rendered naturalistically, with grapes arranged in an irregular pattern rather than a honeycomb and sometimes overlapping), about 118 x 70 mm (chainlines 26 mm apart). Unfortunately, the watermark literature does not cover this period well, but the crown is in the general style of those used much earlier for a fleur-de-lis on a crowned shield, such as Heawood 1822. Drawings 20 and 21 may be on the same stock as 9 and 11 but show no watermark, though 20 was made in Peru and the others in New Caledonia. Drawings 9, 20, 21 and probably 3 and 19 are executed on oblong 4to leaves; at least most of the others are on oblong folio leaves. Drawing 13 may be backed with smoother wove paper.

Prosper Halvor Henri Oscar Romieux, who used the first name Osmond, joined the French navy at Rochefort (less the 30 km from his native La Rochelle) in 1841 and passed his exams at the École Navale in 1843. He made his first tour of duty in Polynesia during the Franco-Tahitian War (1844-47), at least from 1845 aboard the ship "La Virginie". We find no record of Romieux or the ship visiting New Caledonia during this period, although it is "only" 4500 km from Tahiti. Romieux must have shown artistic skill from early childhood, for already on this first tour he made excellent watercolour drawings, and he continued to make watercolour views around the world until he retired from duty in 1891. He was made a chevalier of the Légion d'Honneur in 1863 and later an officier. Other undated drawings also record him in New Caledonia and Peru (including Lima and Callao). He is documented in New Caledonia in 1880 and 1882, but the present drawings are unlikely to be that late, and we have found no date for his visit(s) to Peru. We have little record of Romieux's movements from 1848 to 1850, but if he left the South Pacific he soon returned, for he is recorded in Hong Kong in 1851 and the Philippines in 1852 (in 1851 he was an Enseigne on the ship "l'Algérie"). He must have left in 1852, however, for he is recorded in the Seychelles (in the Indian Ocean) in 1852 and Italy in 1853 and 1854. In this last year he was promoted to Lieutenant, but we have another gap in the records of his movements from that time to 1860. He may have made the present drawings during this period, for he set off for the Levant on the ship "Redoutable", apparently in or shortly before 1860, since he is regularly recorded in Syria, Lebanon, Greece, Algeria and Jerusalem from 1860 to 1864. He was promoted to Capitaine in 1867 and continued his travels, but since the present album was probably bound in or before 1856 we think it unlikely that he made the drawings after 1864.

Although the binding is signed by Giroux, the firm operated primarily as suppliers of artists' materials and Ramsden plausibly suggests that they "commissioned bindings by the best executants of the day". Alphonse Giroux established the firm by 1799, but his son Alphonse Gustave Giroux (1809-86) managed it from at least 1838 and the father died in 1848.

We have not identified the "A.L." who apparently acquired these watercolours and had the album made in the 1850s: Lugt lists several French collectors with those initials active at the time. One watercolour has a small corner torn off at the lower right, another is slightly frayed along the right edge and the one on thin wove paper is very slightly browned, but the watercolours are otherwise in very good condition. The binding may have been expertly rebacked, preserving the original backstrip, but so unobtrusively that one must wonder if the binding was originally made that way. It is further in very good condition and even the folder is olny slightly rubbed.A lovely and finely executed series of large watercolour drawings of the coasts of New Caledonia and Peru, probably made in the 1850s and mounted in a stunning gold- and blind-tooled contemporary album. 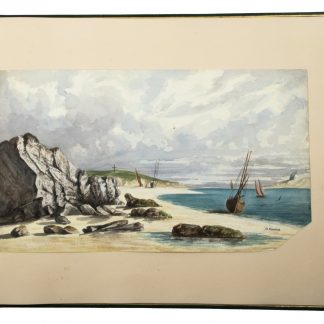